One of the most evocative bicycle brands with a long history is the French Peugeot. Unfortunately, it has disappeared from professional cycling for a while, but still the brand that has the most number of victories in the Tour de France after Pinarello, namely 10.
Moreover, you still see a lot of young people and collectors riding around the cities on vintage steel Peugeot racing bikes.
So it's high time for a piece of history about Peugeot.

1882: the Grand Bi came over from the United Kingdom

The history of Peugeot starts in 1810 when Jean-Pierre Peugeot and his sons and brother-in-law converted the family's water mill in Sous-Cratet into a small steel company where they produced laminated steel for tools and watch springs, among other things.

It is not until many years later and after a few name changes that Armand Peugeot, a member of the Peugeot family, designs his own bicycle in 1882: the Grand Bi, which is named “Le Français”. Armand Peugeot was inspired by the United Kingdom where the Grand Bi was very successful. The bicycle, however uncomfortable, stood for innovation and emancipation and was also very successful with the women.

Their typical medallion with the lion was already on display on the first Peugeot Grand Bi. The lion has been a symbol since 1858 and it would always remain that way, subject to some design adjustments over the years.

The Grande Bi is also a great success in France and a new workshop of three hundred workers is built in Montbéliard . Only a few years later, in 1886, Peugeot also opened a new workshop in Beaulieu (Mandeure), which would become the main production site for bicycles until the 1970s.

It was soon decided to produce other models: the tricycle, le bicycle and le petit Kangourou.

Production rose steadily: sixteen thousand units were produced in 1897 and twenty thousand in 1900.

In 1889, Peugeot exhibits its latest bicycles at the World Exhibition and opens its 1ste winkel aan de avenue de la Grande-Armée in Parijs.

In 1890, Peugeot released the “La Lion” model, which quickly won over a female clientele thanks to its elegance and robustness: this bike weighs “only” 22 kg, is available with a straight frame or a gooseneck model and also has a chain case.

With the advent of the 1st World War, Peugeot shifted its production from ordinary bicycles to folding bicycles that could be carried by the soldiers on their backs. After the First World War, the demand for both cars and bicycles increased, which led to the car company being separated from the bicycle department in 1926.

The first victories in the Tour de France

It was not long before Peugeot also started to produce racing bicycles and with success, because the first victory came in 1896 when Paul Bourillon became world sprint champion in Copenhagen on a Peugeot racing bicycle.

From 1901, Peugeot starts with its own cycling team and is therefore at the start of the 2nd Tour de France in 1904. With success, because Hippolyte Aucouturier, who had previously won Paris Roubaix twice (1903 and 1904), finished 4th in the final classification .
The following year, Aucouturier did even better by winning 3 stages and finishing 2nd in the final standings. The final victory was for his teammate Louis Trousselier, better known as Trou-Trou and very popular with the French public.

In 1906, 1907 and 1908, the Peugeot team added a final victory each time with René Pottier and Lucien Petit-Breton twice. Then it took until 1913 for another victory with the Belgian Philippe Thys. The following year he did it again neatly.

Also in 1913, Oskar Egg set the cycling hour record on a Peugeot bicycle with a distance of 43.525 km. The last victory of the Peugeot team in the Tour de France before the 2nd World War was in 1922 with the Belgian Firmin Lambot who was no less than 41 minutes ahead of the 2nd. It was a total success because the Peugeot riders achieved no fewer than 11 victories.

Due to the difficult economic years, a co-sponsor soon joined the Peugeot cycling team, some for only 1 year, others for longer periods. The most important between 1905 and 1955 were Wolber, Dunlop, Lecoeur and Hutchinson.

The fifties and the sixties

After some difficult years without a major victory in the Tour de France, the 1950s and 1960s saw another heyday with a wave of young talented riders including Charly Gaul, Tom Simpson, Roger Pingeon, Ferdinand Bracke, Walter Godefroot and a young Eddie Merckx.

Tom Simpson won Bordeaux Paris in 1963, Milan Sanremo in 1964 and in 1965 became world road champion and won the Tour of Lombardy. In 1967 there was another victory in the Tour de France with Roger Pingeon. The team was then called Peugeot-BP-Michelin.

The typical black and white colors

The heyday in the 1950s and 1960s also led to the launch of a new design on jerseys and bicycles: the typical black and white checkered design that made the team and the bicycles so recognizable until the end of the Peugeot cycling team in 1986 .
The top model PX10 also received a facelift from blue to white-black during that period. 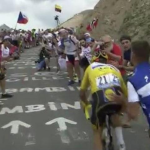 Poussettes and hanging on the pants 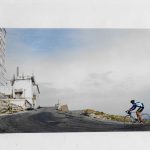 The myth of Mont Ventoux does exist 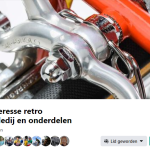 What to look for when buying a vintage bicycle?