Cycling in the past: heroic or madness?

I hear a lot of people say that cycling used to be much harder, that the riders are now pampered too much and that it is more of a team sport than an individual battle.

I partly agree with that, but is that not the case for everything in our current society? We no longer work 6 days a week, we have all kinds of gadgets in the kitchen such as a dishwasher, washing machine, dryer that have made our life more comfortable and simpler. How many young people still cycle more than 10 km to go to school and we can continue like this for a while.

If we look back at the cycling of the past, with resounding names such as Maurice Garin, Philippe Thys, Sylvère Maes, Fausto Coppi, Briek Schotte, Rik Van Steenbergen, Louison Bobet, Ferdi Kubler, Hugo Koblet, Gino Bartali and many other names, then we are only too happy to describe this period as heroic and what some of us may or should regard as romantic or nostalgic we should actually regard as madness.

No cyclist who would now think of riding a 500 km ride with a start at night, having to repair his own bike, riding up a mountain without a derailleur or having to find his own hotel in a grand tour .

And that's a good thing, because times have changed. Just like the 6 day work week and child labor (at least not with us) will never come back.
Just as we romanticize the harsh farm life of the past, the achievements of the former cyclists are seen as heroic deeds and rightly so, but weren't these heroes subject to a kind of slavery that they could not get out of? The cyclist at that time had very little choice, received little or no support from his fellow cyclists, cycling unions did not yet exist and the cyclists at that time were much more immature than the cyclists of today. If we see the interviews in these days and compare them with now there's an amazing difference.

In the early days of cycling, performance was secondary to sport. It was the dream of Henri Desgrange, founder of the Tour de France, that only 1 rider would reach the finish. The course was inhumanely difficult. In the early days of cycling, many cyclists came from a lower social class and hoped to earn their living with cycling. That's why they accepted the slavish execution of the stages. 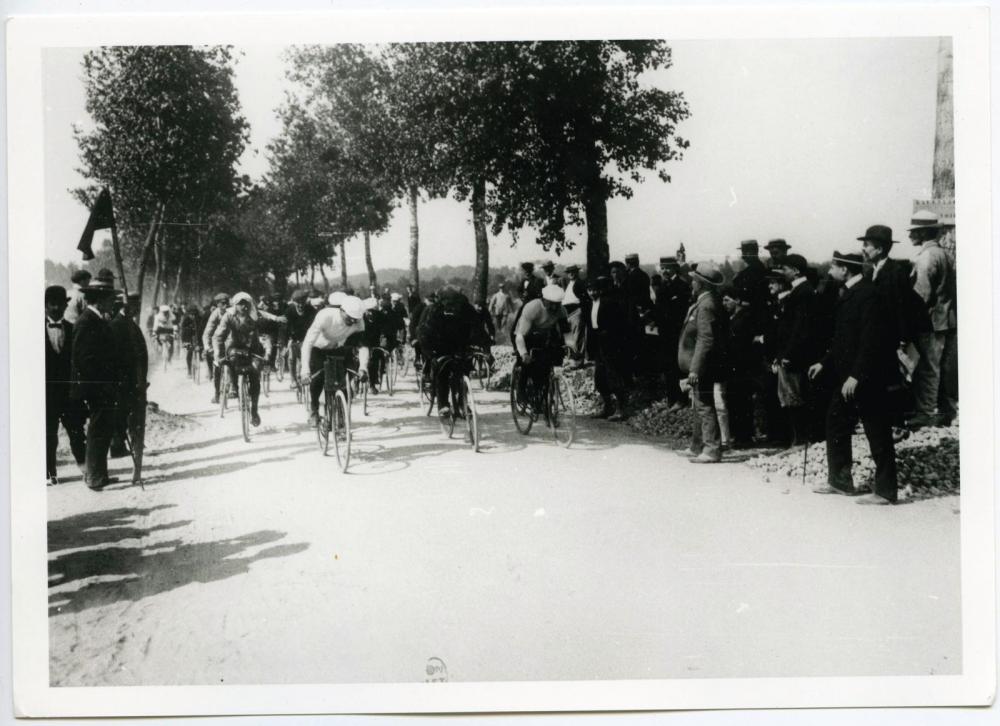 The participants of the very first Tour de France in 1903 with in front left in white Maurice Garin, the 1st winner

Sport in general has become a huge business and was not seen as a real profession in the past. But has cycling become less hard and are the cyclists, as some claim, pampered too much?

It has all become so much more professional: training camps, heart rate and wattage meters, aerodynamics, isotonic drinks, medical supervision, technological improvements, and so on.
You could say that cycling used to be much more a battle between different individuals, while it is now more of a team sport, but to win you still have to drive faster than the 2nd and the speed of this 2nd is currently very high.

Can you still imagine that a rider would cover no less than 4500km during a six-day race and this in a closed room full of cigarette smoke because the spectators in the courtyard are smoking in full. During the earlier six days, the riders sometimes slept only a few hours between the different races. 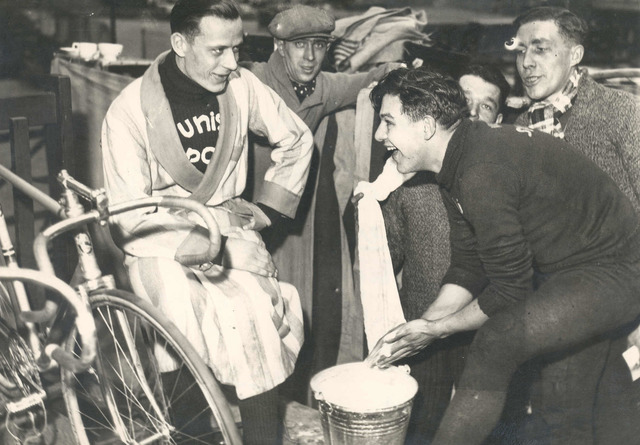 rest between the races during the Antwerp Six Days in 1938 – photo J. Van den Abbeele

Can you imagine that the riders in the Tour de France have to ride a stage in the morning, then have to make a long journey to have to ride another stage at the new location?

Can you now imagine a rider sleeping in the car because the hotel assigned by the Tour de France was so dirty that the rider didn't want to sleep there. The rider in question was Lucien Van Impe but there must have been others. In the past, the riders were sometimes housed together in one large dormitory of a school or a parish hall.

All things that used to be considered normal, but fortunately belong to the past. One rider who has played a major role in stopping this madness is Bernard Hinault, who served as a spokesperson for his fellow riders and threatened strikes if conditions didn't change.

Fortunately, the days when the drivers had to do hard work are long gone: clean the bike themselves, lay tubes, take the train, pay the hotels, provide food, get off the road to get a drink somewhere in a cafe, no receive assistance, and so on.

Matching the season to the Tour de France

Of course you have to admit that there has been a period when cycling was quite boring, at least as far as the grand tours are concerned! A long break that lasts until the finish, a climber that destroys everyone (the last one must have been Marco Pantani).

Cycling, like society, has changed, but the exploits of cyclists will always remain.

Nor do they demand that the huge gaps between the cobblestones of Paris Roubaix be filled and they do not remain lying down like footballers after a crash.
They ride up several out-of-category cols during a mountain stage in a Grand Tour and make battle right from the start.

No, to say that today's cyclists are no longer heroes is dishonoring this wonderful sport.